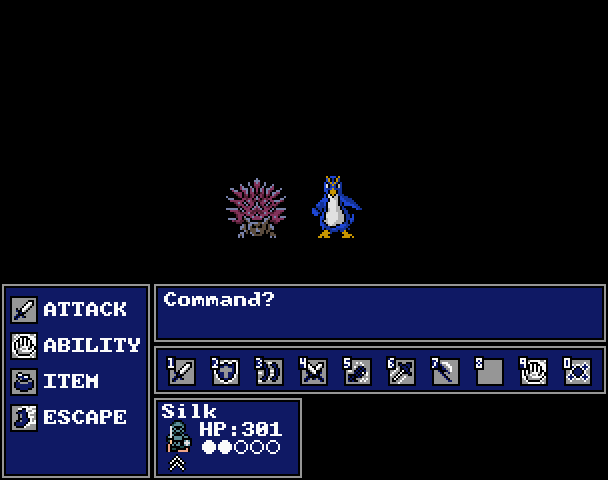 Soldiers are one of NEStalgia’s most popular classes, but the problem with Soldiers has always been the way they use their abilities. Because Soldier special moves haven’t had anything like an MP cost in the past, other design measures had to be taken to balance them out: Impale could miss, Headbutt would constantly fail and cause blow back damage, Reckless was a crapshoot, etc. When redesigning Soldiers I wanted to keep a bit of the random chance and blow back damage aspects of their abilities without making those penalties quite so harsh. In order to do that while still keeping things balanced, Soldiers needed a new way to power their abilities. My answer to the problem was the use of a very common modern RPG mechanic: a stamina meter. 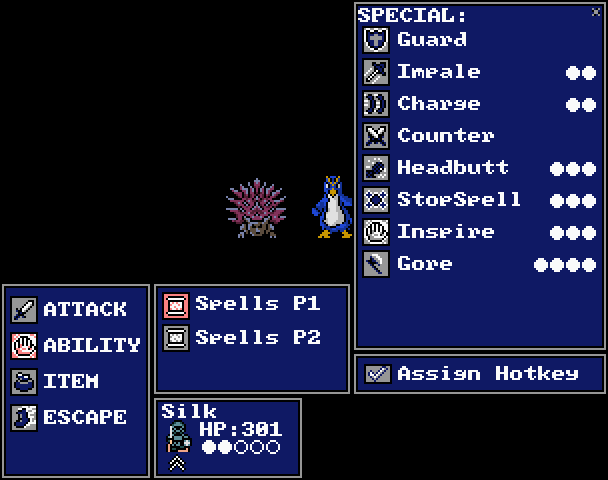 Called “Will”, a Soldier’s stamina meter consists of five hollow circles that fill up at the rate of one circle (a Will point) per round of battle. The Will meter is reset between battles, so Soldiers always start each fight with an empty meter. Regular attacks and certain basic abilities (Guard, Counter, etc) do not use any Will, allowing you to save up your points to use the Soldier’s new powered up special moves:

StopSpell – StopFire, StopIce and StopStorm have all been combined into one ability that reduces all incoming elemental damage by 30% for two rounds for the entire party. Cost: 3 Will points

Reckless – Pretty much the only thing that’s remained the same about this special move is the name. At 4 Will points, it now targets all enemies and does a full damage strike on each target, but also returns 50% of the damage back to the Soldier. With some investments in the skill tree, that damage can be reduced to 20%.

Impale, Gore, Headbutt – All of these abilities can be upgraded to have either a 100% Bleed success rate, or very close to it.

The Will meter is a cool new mechanic that should make playing a Soldier a lot more fun, but v1.52 has even more changes in store for the class. The Soldier’s two skill trees are Berserker and Guardian, and from the names you can probably guess that they’re geared towards offense and defense respectively. These trees will allow Soldiers to become a raging damage dealing beast, the ultimate defensive tank, or some mix of the two:

Hopefully this will be one of the last few blog posts that I write about v1.52 before all of you actually get to play it. Development is moving along well, albeit slower than I expected (I still don’t want to give out a hard release date). There is a lot of new stuff in store for the coming weeks, so stay tuned.