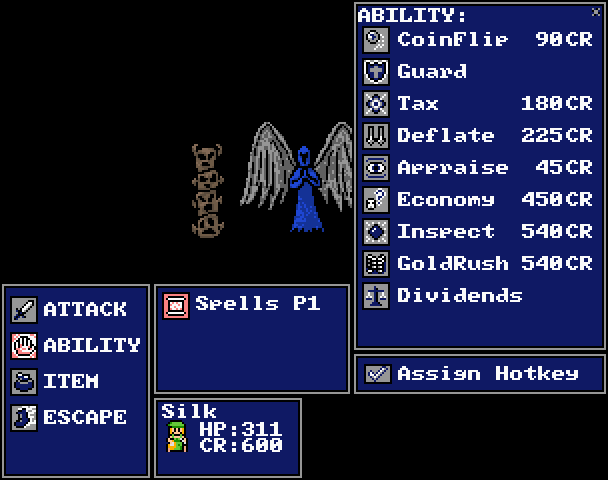 Merchants have always been a bit of an experimental class. My goal was to create a class that could fill the same party roles as Soldiers while simultaneously maintaining a unique play style. I think that the Merchant as it currently stands does meet those criteria and is a lot of fun to play, but there is a ton of room for improvement.

I love the fact that Merchants use gold to power their abilities, though I always expected that the biggest problem for players would be the fear of running out of gold in battle. Instead, the opposite problem has emerged: rich Merchants essentially have an infinite mana pool. Much like I did with the Soldier class for the v1.52 update, my goal was to give Merchants a more controlled system for powering their abilities so that I could in exchange make those abilities more useful and more powerful. Therefore, gold is out, and Credit is in. 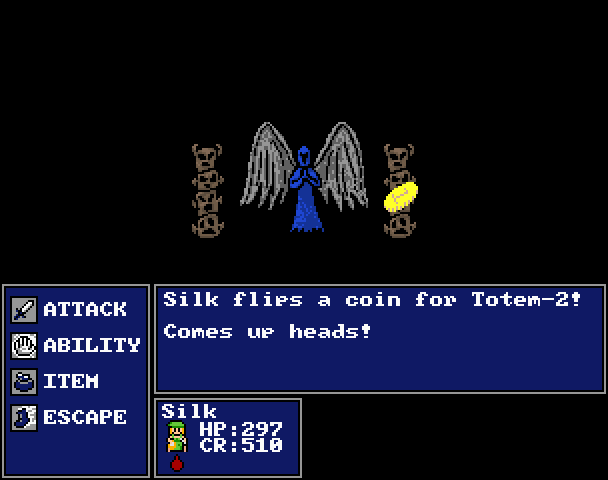 The Merchant Credit system is similar to the Soldier’s Will system in that it’s essentially a stamina meter, although it functions quite differently. Instead of automatically gaining Credit points at the beginning of each round, Merchants earn Credit every time they inflict or receive damage. Furthermore, Credit is actually carried over to the overworld and doesn’t get reset after each battle. A Merchant starts out with a maximum of 600 Credit points which can eventually be upgraded to a max of 800. The amount of Credit that a Merchant receives when dealing or taking damage can also be upgraded in their Skill Trees.

This system is a very significant change, and as you might expect, the Merchant’s moveset has been tweaked to accommodate it. Many abilities have either been modified or completely replaced with new exciting moves. To name a few:

Dividends – Replaces the Merchant’s existing Profit ability. It heals the Merchant for 1% of his Max HP per 10 CR saved up.

Trade – The Merchant and a single target swap their current status buffs and debuffs. Cost: 250 CR.

Loan – Restores all of the Merchant’s Credit in the overworld at the cost of 1 Gold per 2 CR.

The Merchant’s two skill trees – Enforcer and Commerce – allow them to focus on either offensive or defensive skill sets. Some Merchants may build their character in a way in which they’re constantly earning and spending Credit, and others may choose to take advantage of skills such as Credit Check and Reserve Ratio which give big attack and defense boosts based upon the amount of Credit currently saved up.

As you can see, in v1.52 the Merchant is becoming a much more varied and unique class that really stands on its own. I feel like my original goal for the class is now fully realized: a Merchant can fill the same roles as a Soldier, but there is no longer any other class in the game even remotely like it. I think that existing Merchants are going to love the changes, and those of you looking for a new 1-32 experience come v1.52 definitely ought to consider giving this class a try.