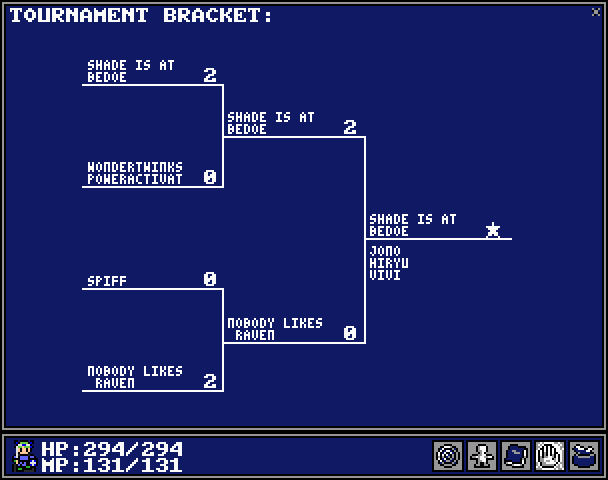 Both Spiff and I have been hard at work this month on different tasks. While Spiff has been tackling an automated PvP tournament system, the majority of my time has been devoted to Monster Companions.

The automated PvP tournament system will allow us to schedule regular weekly tournaments for both brackets (20s and 32s). The brackets are generated based upon the teams that sign up during the week (and show up on time), and then the tournament takes place without the need for Moderator supervision. Members of that week’s winning teams will be rewarded not only with Colosseum Badges, but with statues of themselves displayed inside the Colosseum (Spiff’s idea!).

The new tournament system has been in open testing all month long and is very close to completion. Yesterday we also hosted our very first closed beta test for Monster Companions, which went incredibly well. Everything is looking very solid, including the Companion battle A.I. (which let me tell you was no small task to create).

Although you won’t be able to directly control your companions, you will be able to set each companion’s battle tactics via the new Tactics menu in battle. The tactics themselves are fairly self-explanatory (Balanced, Offensive, Defensive, Conserve), and can be changed on the fly at anytime during battle.

In the overworld players have full control and will be able to cast their companion’s spells manually. Companions won’t be able to equip gear or carry items, but they do have slots for Stat Seeds and their own version of Skill Trees called “Milestone Boosts”. These boosts allow the player to choose between one of two skill options for the companion every 5 levels. What’s more, every companion has a unique set of Milestone Boosts specifically tailored to its breed.

You’ll notice that the companions either use MP, Will or Rage to power their abilities (Rage is identical to the Merchant Credit system). The type of resource a companion uses to power its moves has a big impact on how it handles itself in battle. The earliest healing companion in the game (Blue Slime) actually uses Rage to power its abilities, which makes for a decidedly different type of healer that can’t always burst heal but will never run out of MP.

As usual I’m not going to give out release projections for this stuff until it’s much closer to being finished. I’m very happy with where we’re at though, and I’m also getting excited to dive right into content expansion work as soon as companions are done. As testing continues over the course of the next couple weeks I’ll be sure to share many more details and screenshots

12 Responses to “What We’ve Been Working On This Month”