Having covered all of the essential information about skill trees in Part 1, today I’m going to expound on some of the details and previously unannounced features coming in v1.52. Again, if you have any additional questions then please feel free to ask them in the comments section. Today’s Q&A:

Will the new spell animations be included in v1.52?

Yes. The current flashing boxes that represent different attacks and abilities in battle are getting replaced in this update with full blown animations and additional sound effects. Just writing about this change doesn’t do it justice, so I posted a short video on NEStalgia’s Facebook page and Twitter feed a couple days ago to demonstrate some of these new effects in action:

What changes are coming to Soldiers and Merchants?

I had planned to answer this question here, but I’ve instead decided that it will be better to devote an entire blog entry to this topic instead. Look for that post soon 😉

Are Stat Seeds staying the same?

Stat Seeds will still function the same way, with one major convenience change: you will now be able to remove individual seeds through your Status Menu instead of having to purchase and use a Seed Cleaner to remove all of them at the same time (removing a seed will still trash it). This change should make managing and swapping out your seeds much easier.

What does the big re-balancing entail?

As we’ve mentioned many times in the past few months, most of the game is going to be re-balanced to accommodate the new skill trees and to smooth out the rough edges that currently exist. The stats on many abilities, items, monsters, etc. may change, but the general “feel” of the balance throughout the existing content should remain the same. 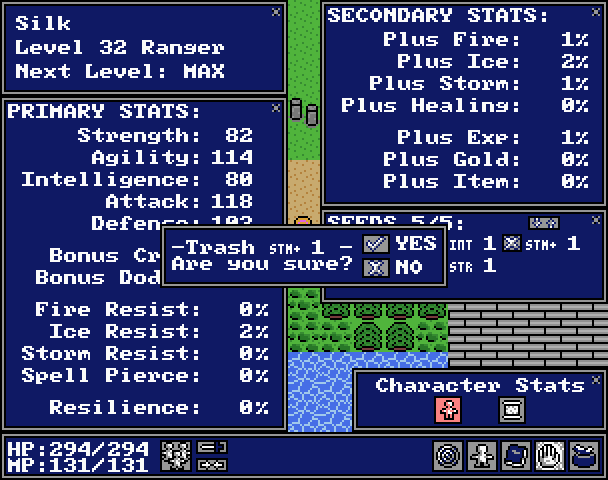 Inflated burst damage is the biggest balance issue right now. Across the board you’ll be seeing attacks doing a bit less damage, particularly AoE (group) attacks. Damage done by AoE abilities like Wizards’ Blizzard spell will now be spread out across multiple targets. The more targets your attack hits, the less damage it will do to each individual target. This should help close the gap that currently exists between classes that have AoE attacks and those that don’t.

Although we’ll be testing all of this it may still take a couple weeks of tweaking on the live servers to get things just right, but balance will be a top priority for us with this update and the small patches that follow. 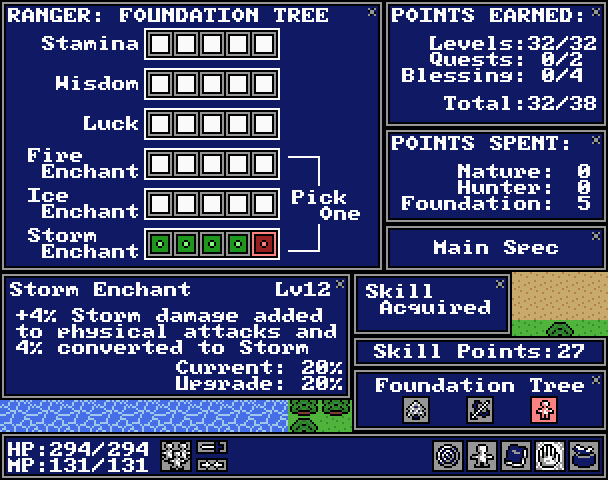 Located within the Foundation Tree shared by all classes, the new Elemental Enchant skill branches will serve to make Plus Element, Piercing and Elemental Resist much more viable for melee classes. Each level of the enchants add 4% elemental damage to all physical attacks (that includes special moves), and also convert an additional 4% of the base damage to elemental. Therefore, if you max out an enchant branch you’ll be dealing and additional 20% elemental damage on physical attacks, and another 20% of the base damage will be counted as elemental.

It may sound confusing, but it’s actually pretty simple. If you’d normally do 100 damage to an enemy, then with a maxed out Storm Enchant you’d deal 120 damage, with 40 of that damage being counted as Storm. That means that any Plus Storm you have will increase those 40 points of damage, and any Storm Resist the enemy has will reduce them (Spell Piercing comes into play as well). In other words, these new enchants are a double-edged sword, but one that gives players another potential play style and also increases the value of many of the overlooked gear drops in the game. The next time you pick up a piece of Soldier gear with a bunch of Plus Fire on it, you might want to hold on to it.

The size and scope of this update has grown exponentially in the past few weeks, which is partially why it’s taking longer than I anticipated. Almost all of the new features would be big updates on their own, and combining all of them into one massive patch is much more time consuming than the “skill trees only” update that I had originally planned.

When we’re nearly finished testing and I can set a solid release date, all of you will be the first to know about it!