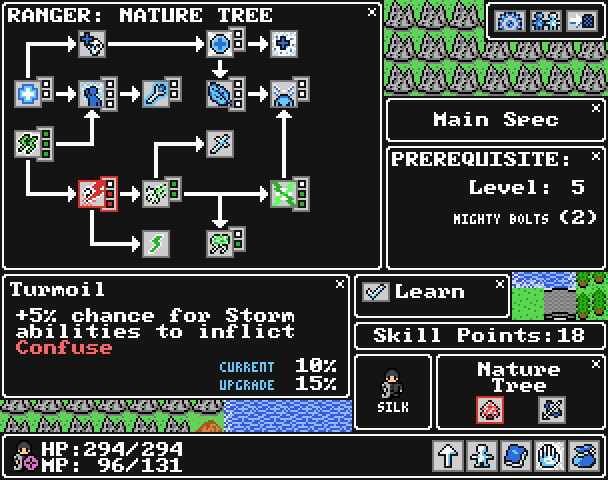 After several months of non-stop development work, the v1.68 update finally went live Friday night. For those of you who are unfamiliar with either this update or our forthcoming Steam launch, here are the highlights:

There are a ton of changes in v1.68, both small and large. You can read the v1.68 update notes for all of the details, but the gist of it is that the game has been re-balanced to allow for future expansion and upward growth. This update is basically the foundation of Key of the Exiles, meaning that it includes all of the gameplay improvements that we had lined up for the expansion. The visual upgrades, new music and other myriad improvements are also meant to prepare NEStalgia for its launch on Steam.

There will probably many small patches in the weeks to come as we fix any new bugs and balance issues, but the next big update that you’ll see will the be the Key of the Exiles content expansion itself.

You can now play and host local games

The new NEStalgia Launcher allows users to play single player games or to host small private games with friends. After the Steam release this Launcher will enable anyone to host larger public dedicated servers, meaning that the existing official servers will be one of (hopefully) many places that you can play NEStalgia. 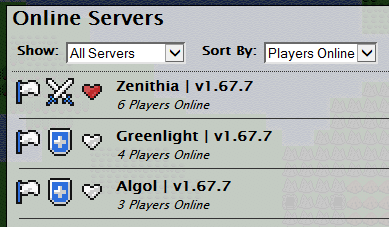 You’ll also notice that many new features have been added to the NEStalgia Launcher, all of which are intended to make browsing for servers much easier in the event that we have tens or hundreds of online servers following the Steam release. You can sort and filter the server list, add servers to your “Favorites” list, and view a list of servers that you’ve recently joined. 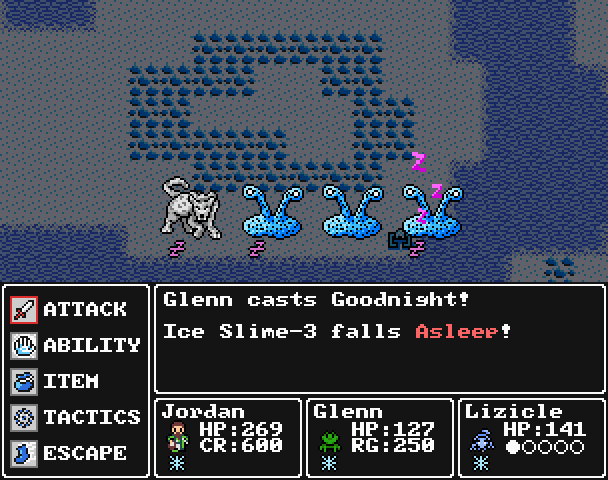 It took much longer than we had originally hoped, but we finally have all of the Steam API stuff integrated into the NEStalgia Launcher. That means that we’ll definitely be launching on Steam in April (hopefully in the next two weeks). Once we have a release date confirmed with Valve we’ll be sure to make a big announcement.

The Steam integration is pretty straightforward, and the build of NEStalgia sold on Steam will be no different than the one you purchase from our website. When you purchase the game through Steam you are still required to create a BYOND Key, and that key is then activated as having purchased NEStalgia. You can alternatively use your Steam purchase to activate NEStalgia on any existing BYOND Key without a subscription.

Anyway, the long and short of it is that there will be no reason to purchase NEStalgia on Steam if you already own it; buying the game through Steam won’t offer any extra features or advantages. Although a back-end link is created between your Steam ID and whatever BYOND Key that you activate a NEStalgia purchase on, that link really has no bearing on anything else.

As we discussed many months ago, NEStalgia is now no longer “Free to Play”. If you’ve never had a subscription or are a former NEStalgia subscriber with an expired subscription, you’ll still be able to access and play your existing characters on the official NEStalgia servers. Outside of that you’ll face all of the other restrictions on unpaid users.

People who haven’t purchased the game can’t host private servers or join multiplayer games. Single player games are also restricted; unpaid users can try the game offline in Demo Mode, which allows travel through Balzackia and has a level cap of 10.

The “Official servers” are simply dedicated servers hosted by Silk Games. We’ll be adding many more of these servers prior to the Steam release, but we’re expecting that many players will choose to host or play on public dedicated servers as well. For users who have previously been banned from NEStalgia, that ban only applies to the official servers. We don’t have any say over what happens in private games or on public servers.

Feedback on balance and bug reports is going to be critical in the coming weeks.  Once we get all of the big balance changes dialed in we’ll be able to start trickling out new content in anticipation of the Key of the Exiles expansion.

The Steam launch is obviously going to be a big deal, so a lot of what we’re doing right now is preparing for the potential wave of players that Steam could bring. How well that launch goes will have a big influence on our development time frame for the expansion.

Many  people put in a ton of hard work to bring you this weekend’s updates. Spiff (tenkuu) worked tirelessly on debugging behind the scenes, and Tom and Lummox from BYOND put in a lot of time to get the NEStalgia Launcher ready for Steam. Mikau also contributed to the Launcher, and Balzack has been doing a great job managing the community while I focus on development.  When it came to the closed beta there were several standout testers who spent a lot of time bug hunting and reporting, which really helped to speed up the process.

Last but not least, everyone who contributed to the Pre-Steam NEStalgia Fundraiser back in December truly helped to make all of this possible. I would not have been able to fully devote myself to development in the past few months without that fundraiser, and even smaller things like the new music would not have been feasible.

Anyway, I hope that those of you playing the game enjoy the v1.68 update. Definitely stay tuned for an announcement regarding our Steam release date!