Getting DCed in the middle of battle in any online game sucks, and NEStalgia has been no exception. Up until now we’ve had to count all battle disconnects as a death for the player, meaning that you’d lose half of your gold and be returned to the last town you visited.  Thankfully, however, the nature of NEStalgia’s turn-based battle system affords us a unique opportunity to take most of the sting out of battle disconnects in a seamless way. With today’s v1.60 update we’ve finally made good on that opportunity.

Battle disconnects are handled differently based upon the type of battle that a player is disconnected from. While the philosophy of how the system works is fairly simple, the devil is in the details: 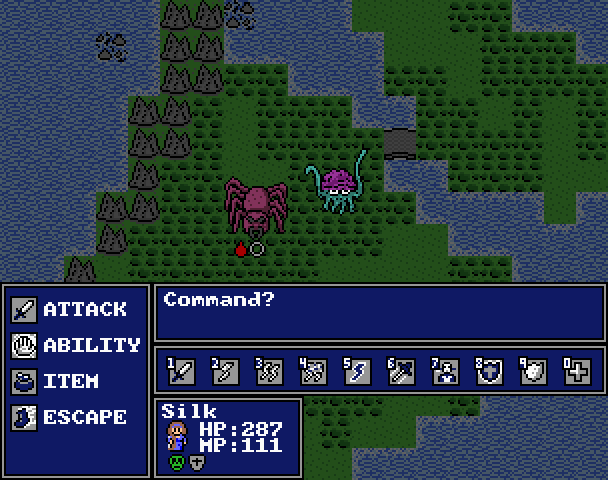 Never be afraid of a disconnect again!

There is an expiration timer of sorts on the disconnect saving, as whenever we update the game to a new version number it will reset your saved battles and count them as a loss. Therefore, it’s probably a good idea to only rely upon this system when you have to. A feature like this must be designed in anticipation of the ways that players will try to abuse it, and it was very important to ensure that logging out mid-battle could never give a player any sort of strategic advantage.

The v1.60 update has already gone live. It has (of course) been thoroughly tested, but if you do find any bugs in this new system then please report them right away.

We’re probably going to start doing the NEStalgia podcasts bi-weekly until the standalone game clients and content expansions start to roll out. I know that it’s really only the more hardcore/active players who listen to the podcasts, so I’d like to balance things out with some regular blog posts for all of our dormant followers who just stop by occasionally to check in on NEStalgia.

This was a fairly busy week for us: we merged the two remaining PvE servers Algol and Sosaria into one giant super server (we kept the name Algol). The nice thing about this merge is that players with characters on both servers had their savefiles merged together, so the transition was fairly seamless. When we eventually have hundreds of veteran players returning to play the content expansions we’ll simply start up a couple new PvE servers and be good to go. We’re also exploring ways to allow individual servers to host more players.

In addition to the big merge, maintenance was performed on every single savefile on both Algol and Zenithia to prepare the game for Monster Companions. The only change that players will notice from this maintenance is that their character slots have been re-sorted, eliminating any empty gaps between files.

As you can see in the official update notes, v1.58 is a pretty small release in terms of updates visible to players. On the backend, however, there were lots of efficiency improvement and code changes related to Monster Companions. In fact, we can actually create working monster companions for testing purposes on the live servers right now. We’re still a ways off from the actual release of the companion update, but v1.58 was a big step forward.

Spiff has been making good progress on his automated Colosseum tournament system. Having regular weekly tournaments is going to be a big deal for the community, and I can’t wait until we get there.

I’ve been tackling Monster Companions, and some of the fruits of my labor may be popping up on the live servers in the very near future. The long-promised battle disconnect saving system that will essentially eliminate the penalty for battle disconnects is next on my agenda.

Last but not least, don’t forget about the official PvP tournament on Zenithia this Sunday.

With a standalone installer and the flash client on the way, 2012 is going to be a big year for NEStalgia. As we work to exponentially increase the NEStalgia’s player base this year, the game itself will continue to receive lots of awesome new updates and content expansions. The next big update in the works is the previously announced Monster Companion expansion that will enable players to recruit almost any monsters in the game to be their AI controlled allies. For this week’s podcast we did a Q&A about this new companion system based upon player submitted questions:

You can find this and previous podcasts on the NEStalgia Podcasts page and also on iTunes.

Although lots of progress is being made, I won’t be making any big preview blog posts about Monster Companions (or the automated PvP Tournaments that Spiff is working on) until there is something worth showing off. As soon as I have something solid to report, all of you will be the first to know about it.