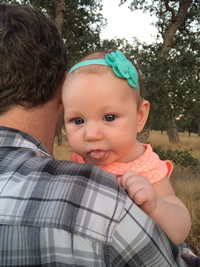 This little one has been keeping me busy…

We knew that the Steam launch would be a big deal, but seeing it actually happen back in April was pretty incredible. The crazy part for me personally was that in the opening days of the Steam release I was in the hospital with my wife as she gave birth to our first baby. The whole memory is now a blur of me frantically working on my laptop to manage the Steam release and holding my wife’s hand as she delivered our beautiful daughter Isla.

At any rate, between learning to care for a newborn and some health issues (see my recent forum reply) I’ve unfortunately been MIA since the Steam release. I haven’t decided whether or not I want to publicly discuss the health issues that have been plaguing me this year, but the important thing is that I’m feeling much better every day. Perhaps we’ll discuss that topic a bit in a future podcast.

Anyway, today I want to announce some exciting news as well as recap where we stand with NEStalgia development:

I don’t think that the Humble Bundle needs any introduction, as it is the standard for charity bundles in the industry. I’m incredibly excited to announce that starting right now (11:00 am Pacific time), NEStalgia will be a part of a “Modern Retro” flash sale that lasts for 24 hours. This bundle includes over $70 worth of games and soundtracks, with a percentage of the proceeds benefitting the American Red Cross and Child’s Play.

NEStalgia is included in the bundle if you pay at least $6. For those of you keeping score, that’s the cheapest price that the game has ever been offered for – and that’s not even considering the other great games and soundtracks that are a part of this bundle.

This is a short term flash bundle that only lasts 24 hours, so jump on it while you can! Check out the bundle page here: http://www.humblebundle.com/flash

This week we’ll be releasing the v1.68.5 update, which has a variety of bug fixes and balance tweaks. From here on out the NEStalgia Launcher will follow the same versioning notation as the game itself, so instead of being called “Build 19” the new version of the Launcher will also be “v1.68.5”.

One thing to note is that I’ve managed to track down and fix the map scrolling jitteriness affecting certain users, and that fix will be included in v1.68.5.

We’re working to implement client-side saving as an option for players on both private and public servers. “Client-Side Saving” simply means that your character savefiles will be stored on your computer rather than whatever server you’re playing on. The real goal with this change is to make drop-in drop-out multiplayer much easier for small private games, though public dedicated server hosts will have the option to allow client-side savefiles as well. All of the Official Servers will be sticking with the current server-side saving system.

I’m working on updating our server merging tool so that I can begin server merges in the next week or two. I’d love to wave a magic wand and just have a single NEStalgia server support 1000+ players online at once, but until that happens we’ll need to continue to add servers for large population explosions and then merge them down afterwards.

That’s all for today. As always if you have any questions then don’t be afraid to drop us a comment on this post, and don’t forget to spread the word about the Humble Bundle Flash Sale! You’re probably never going to see NEStalgia go for any cheaper than this, and you get a lot of other games as well. Plus, you know, charity.